Watching movies and playing music is one of the primary entertainment purposes served by our computers. So, when you move to a new operating system, it makes perfect sense if you look for useful media players. In the past, we’ve already told you about the best video players for Linux and, in this article, we’ll be telling you about the best music players for Linux-based operating systems. Let’s take a look at them: 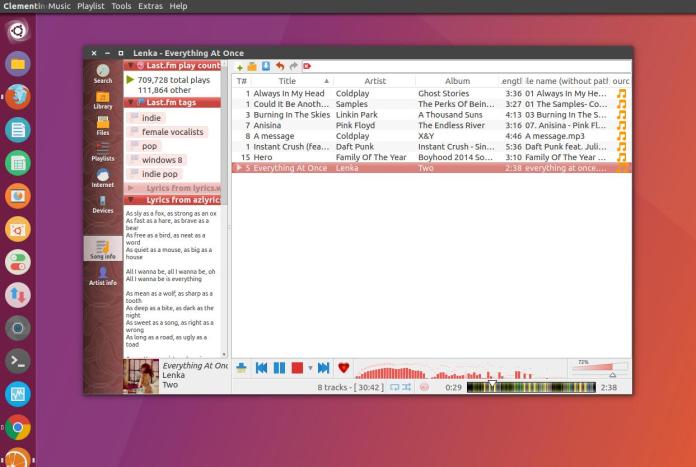 Clementine is a cross-platform, open source music player that’s a popular choice of Linux-using music enthusiasts. Written in Qt, this software is known for its ease of usage and friendly interface. The music player’s main window is divided into three parts. The tracks are loaded in the main, right-most window and the basic controls related to song playback and playlists are at the top and bottom.

Clementine’s strength is its tree-like navigation style which turns out to be useful in case you’re accustomed of playing the music directly from folders on the different drive. At the top-right, there’s a big search box that lets you search for song files on the basis of artist, album, and song. You can also edit metadata of a song easily from the main window itself. Under the song and artist info tabs at the left, you can easily get lyrics of the song, read about song from last.fm, and know about artist details as well.

Why use Clementine for Linux music playback? 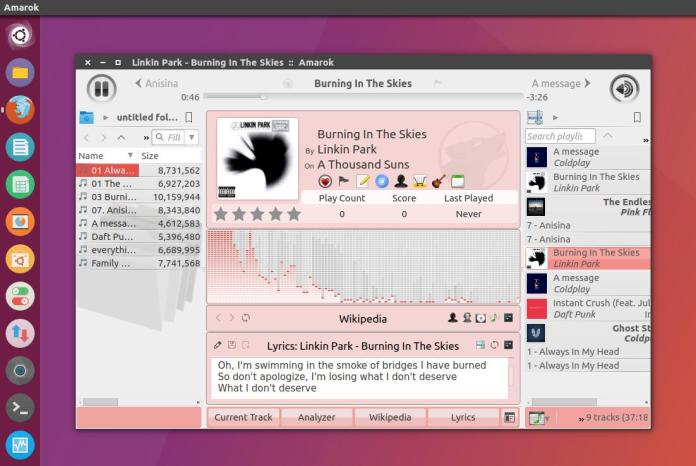 Amarok is KDE’s default music player. This open source tool has been around for years and serving the Linux enthusiasts with pleasure. Even after losing its charm in the recent years, it manages to give a tough competition to other players in this collection. It’s my personal favorite music player for Ubuntu. It boasts of featuring a large set of features and plugins.

The player has three main window panes: Playlist browser, Collection, and Player Window. It also boasts of some advanced features like fetching from media players like iPod. My favorite feature of Amarok is its automatic Wikipedia search that looks up for artists and shows lyrics, if available. 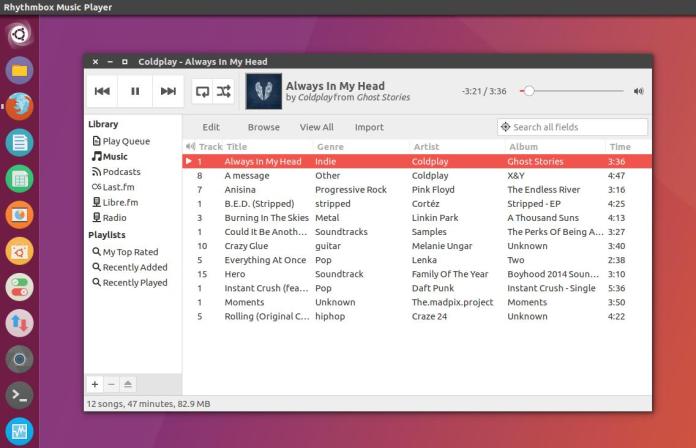 The third entry on this list of best Linux music players is Rhythmbox, which is the default Ubuntu music player. Personally, I’m not a big fan of this audio tool due to its lack of customization options. However, you can add functionalities and change new features via plugins. In case you’re interested in a music player for simple playback option, you can stick with the default option shipping with your distro.

The main window of Rhythmbox music player is divided into two parts. The songs and playlists are loaded in the main area in right. Using the import option, you can add files to the playlist. Browse option reveals the artists and album tab under which songs are categorized. It also comes with options to play internet radios and podcasts easily.

Why stick with Rhythmbox audio player? 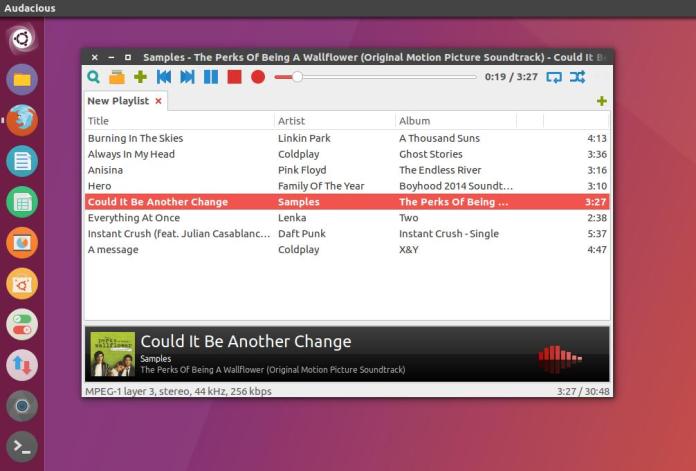 Audacious is an open source media player that’s widely popular among audiophiles. It’s a no-nonsense software that stays low-resource and makes sure that even a PC with older specification doesn’t feel overwhelmed while playing music. It uses around 20-25MB RAM and support all popular audio file formats.

All the necessary controls are stacked at the top that can be used to add music files to the playlist, skip the song, pause it, or shuffle and repeat it. Using the search option, you can load songs in your library and search using song or artist name. In case you love personalizing the looks of Audacious, you can do so with Winamp themes and get more options as well. While it’s not an in-built functionality, using plugins you can fetch lyrics, set an alarm, and a lot more.

Why use Audacious music player? 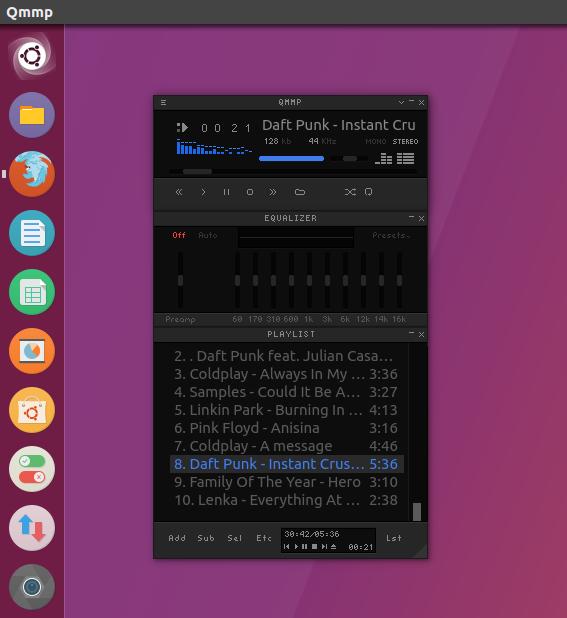 In case you’re a fan of a small, single-window interface, look no further than Qmmp. It borrows its looks from popular Winamp music player. Unlike other Linux music players that take up a big screen space, Qmmp has all the basic controls and playlist in a small window.

Using the menu option at the top left corner, you can access other options like visualization, settings, etc. With its extensive theme support, you can customize Qmmp to a great extent and make it your own. Apart from support for various audio formats and cuesheets, this Linux music player also ships with Volume Normalization as a built-in option.

Why use Qmmp for Linux audio playback? 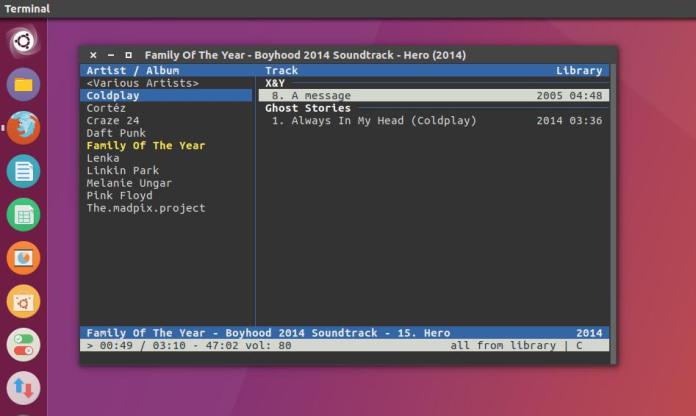 Cmus is a Linux music player for terminal, hence it’s the most different entry on this list. If you’re addicted to your terminal and keyboard, Cmus is meant for people like you. No matter how big is your music library, Cmus loads with a lighting speed and uses about 20MB RAM.

This open source software can also run on older computers whose operating systems don’t have GUI. Its keyboard shortcuts give you tons of power over your music playback and how it’s played. It goes without saying that Cmus plays all major audio formats. You can also use different open source extensions to change color themes, get lyrics, etc.

Why use Cmus terminal music player?

Just like tons of Linux distros for different needs like gaming, older PCs, programming, etc., software for these operating systems also have lots of variety. If you wish to use a feature-rich Linux music player that satisfies your needs, Amarok and Clementine are best options available. I, personally, use Amarok as my Ubuntu media player. In case you’re here for a lightweight Linux music player, Audacious and Qmmp are also great choices.

Do give these audio players for Linux distributions a try and share your feedback with us.